The FAQ Page has been moved to: HELP PAGE

What is the main purpose of a towel warmer?

A towel warmer or as our neighbors across the pond call it, a heated towel rail, drying rail, or heated towel rack is most often found in a bathroom but can also be used in the mudroom or laundry room.  Like a towel rack, it is a place where towels are hung to dry.  But the big advantage is a towel warmer is it uses electricity (electric)  or water (hydronic) to  warm the towels.   What was once considered a luxury only for the wealthy, now can be enjoyed by most.  Stepping out of a shower and into a warm towel is considered by most to bring a delightful gratification.

A towel warmer,  can also be used to dry delicates instead of using a dryer; as well as, wet shoes by hanging them on a robe hook.   They   can also  help keep bathrooms cozy, dry, mold, mildew and humidity free.

It can also be used to dry a used towel thus reducing laundry load and water consumption.  Not only is this a benefit to you but it also a benefit to our environment.

Please explain the difference between an electric unit and a hydronic unit?

An Hydronic towel warmer uses hot water or steam to heat the towel rails.  Hydronic uses the same principles as a radiator.

We only carry hardwired or plug in towel warmers.

Is the bathroom the only room that a towel warmer can be used?

Towel warmers/rails can be used in other places other than the bathroom.  Some models act as space heaters as well. They are also used in mudrooms, saunas, spas, kitchens, or in any room that may need additional heat.

How should you place a towel on a towel warmer /rail?

The most efficient way to place a towel over a towel warmer is very simple.   Our advice is to fold your towel in half lengthwise, and then fold it in halfway.   If you are using a larger towel, you might consider repeating this step again.  By following this method, you have created at least four layers of towel lying on either side of the heated bar.   The layers there are, the larger numbers of insulating layers which help the towel absorb and keep the heat in.  Also, the more layers, the more weight will be resting on the bars thus creating more contact surface area.   Our suggestion is to have the towel cover at least three to four horizontal bars.    You can also fold the towels on its length;  place them on the heated towel bar, then covering it with a large, unfolded towel or bathrobe.
Definitions:
Freestanding:  Towel warmers that are moveable and are not stationed to the wall.
Hardwired:  Wired directly into your electric.  Most mounted towel warmers will either be hydronic or hardwired.
Hydronic:  Heated by circulating warm water.
Mounted:  A towel warmer that is permanently mounted to a wall.
Plug in:  Plugs directly into a outlet.    All Freestanding towel warmers will be plugged in.

Is there a difference between a liquid filled towel warmer and one that is heated by a wire cable?
They both have pros and cons to them. The liquid filled units with heating elements take longer to heat up, but if the heating element dies after the warranty, they can be easily replaced. The units with wire cables heat up very quickly regardless of the size of the unit (about 15min), but if something happens and it dies outside of the warranty, these cannot be replaced. You would need to replace the entire towel warmer.

Towel warmers that are liquid filled:

More than 50% of  towel warmers are installed onto drywall surfaces, as that is the most common wall surface used in the states. It could also be installed onto tile without problems, as well as bead board.
Shop onlytowelwarmers.com

Ordered my towel warmer for a great price and it arrived on time. Called customer service with a question and received a timely, personal and accurate answer. Couldn't be happier with having dealt with Only Towel Warmers for my purchase! 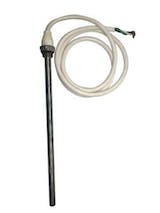 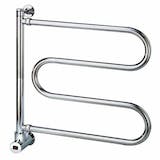